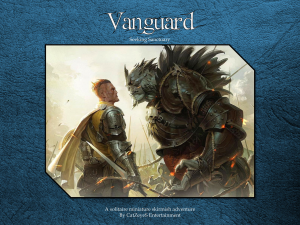 Vanguard: Seeking Sanctuary is a Solitaire Miniature Skirmish Adventure. The county of Middledale is overrun by vile monsters. You are the leader of a band of mercenaries tasked with evacuating the county and leading the trek of refugees to Sanctuary.

The rules are miniature agnostic, so you can play with any miniatures you already have.

If you want it – come and get it (note: though the rules are technically complete, they may still be subject to change!):

If you belong to the Facebook Crowd, feel free to join the group and discuss the game with me: 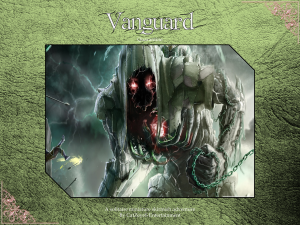 Vanguard: Quarantine is a  one-shot  adventure  set  in  the  same  world  as Vanguard: Seeking Sanctuary.
This time, Middledale is infected by a Virus turning villagers into Zombies.
Can you safe the village before all is too late?
You need to have read V:SS as it includes the core rules.

If you want it, come and get it:

Or in printer friendly:

In the not so distant future, mankind has managed to lay waste to earth’s surface. Even though forced to find a new home on the ocean ground, nothing stopped humans to continue battling each other.
You are a mercenary trying to make his living by serving those that pay most.
Your mission sounds easy at first glance:
Scout the ocean ground for three different resources and bring them back to the hangar, so the technicans can build a bomb you are to drop over the enemy base.
Here comes the downside: You are all on your own between the beasts of the deep sea as well as the very well armed hostile submarines.
And the resources to equip your sub are limited!
Good luck, mercenary – we count on you.

Schleichfahrt – Sneaking Behind Enemy Lines has been created during the Sneaky Sci Fi Game Contest in May/June 2010 held by Rudolf Aligierski.
It is a solitaire ocean crawl in which you are playing a mercenary in his sub on his mission to gather resources and – upon having done so – to deploy a bomb on the hostile base.
While you will encounter monsters of the deep sea as well as loads of hostile subs, fighting is not always an option. Most of the time you will be better off relying on your engines to maneuver you out of sight of the enemy subs.

If you don’t want to assemble the cards, you may as well order them from artscow via this link:

And if you want to have a really fancy looking deck consisting of round cards, follow this link:

Exterior – night.
A lone slayer stands in the market place, gazing.
Suddenly, a flash of light appears in the sky, and a flaming meteor plummets to the Earth.

Welcome to Zombie Slayer!
An evil necromancer has overrun a (formerly) peaceful village with his army of zombies.The zombies are roaming the streets in search for human flesh. Though there are some townspeople left, the main attraction is you – the slayer that has been called to take care of the problem.
Can you save the townies and defeat the evil necromancer?

Zombie Slayer is a free print & play solitaire fantasy game, putting you into the role of a Warrior that has been called to rid the evil off the land.
For starters, you might want to play with the pre-generated slayer, but there are rules provided to create your own slayer.

You explore the town by drawing the different parts of the town from a deck. Whenever you move through the town, Zombies will spawn around you, trying to finish you off.
If you’re lucky, you may run into villagers as well or maybe in one of the buildings you find some treasure helping you on the way?

Aside from the card drawing exploration mechanic, everything else (combat, searching) is dice driven – and you will roll dice a lot!

This site uses Akismet to reduce spam. Learn how your comment data is processed.