Print and Play Games are tabletop games that do not come in boxes as those you are used to. Instead they come as digital files for you to download and to print out. Most of the time you still need to craft some tiles e.g. by cutting them out and/or glueing them to cardboard.

All those games presented here have been designed during different development stages of CatZeyeS Entertainment, so the overall quality varies. Nonetheless I’m wishing you as much fun crafting and playing those games as I had designing them! 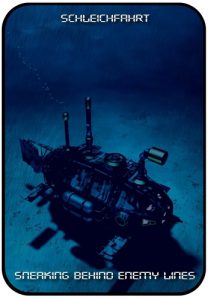 In the not so distant future, mankind has managed to lay waste to earth’s surface. Even though forced to find a new home on the ocean ground, nothing stopped humans to continue battling each other.
You are a mercenary trying to make his living by serving those that pay most.
Your mission sounds easy at first glance:
Scout the ocean ground for three different resources and bring them back to the hangar, so the technicans can build a bomb you are to drop over the enemy base.
Here comes the downside: You are all on your own between the beasts of the deep sea as well as the very well armed hostile submarines.
And the resources to equip your sub are limited!
Good luck, mercenary – we count on you.

Schleichfahrt – Sneaking Behind Enemy Lines has been created during the Sneaky Sci Fi Game Contest in May/June 2010 held by Rudolf Aligierski.
It is a solitaire ocean crawl in which you are playing a mercenary in his sub on his mission to gather resources and – upon having done so – to deploy a bomb on the hostile base.
While you will encounter monsters of the deep sea as well as loads of hostile subs, fighting is not always an option. Most of the time you will be better off relying on your engines to maneuver you out of sight of the enemy subs.

If you don’t want to assemble the cards, you may as well order them from artscow via this link:

And if you want to have a really fancy looking deck consisting of round cards, follow this link:

Exterior – night.
A lone slayer stands in the market place, gazing.
Suddenly, a flash of light appears in the sky, and a flaming meteor plummets to the Earth.

Welcome to Zombie Slayer!
An evil necromancer has overrun a (formerly) peaceful village with his army of zombies.The zombies are roaming the streets in search for human flesh. Though there are some townspeople left, the main attraction is you – the slayer that has been called to take care of the problem.
Can you save the townies and defeat the evil necromancer?

Zombie Slayer is a free print & play solitaire fantasy game, putting you into the role of a Warrior that has been called to rid the evil off the land.
For starters, you might want to play with the pre-generated slayer, but there are rules provided to create your own slayer.

You explore the town by drawing the different parts of the town from a deck. Whenever you move through the town, Zombies will spawn around you, trying to finish you off.
If you’re lucky, you may run into villagers as well or maybe in one of the buildings you find some treasure helping you on the way?

Aside from the card drawing exploration mechanic, everything else (combat, searching) is dice driven – and you will roll dice a lot! 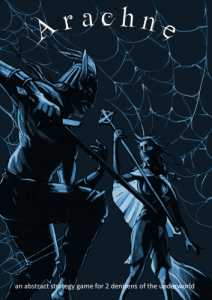 In the dark tunnels and caves far below the surface of our world, evil creatures lurk in the shadows. Some of them, such as the cunning dark elves, have developed a civilization – and in every successful civilization games are played, so the masterminds can sharpen their wits, while the lower townsmen have their share of distraction.
Arachne is such a game: While you can find some elements of the chess game played by the surface dwellers, there are quite a lot of differences, too: First of all, as a devotion to the Spider Goddess, Arachne is played on the strands of a spider web. Also, the cruel and traitorous nature of the dark elves is reflected in Arachne, too: Aside from being able to capture his own playing pieces, each turn, a player gets the option to move and to capture with an opposing playing piece. So, whatever you plan; always be aware, that the true enemy strikes from within! 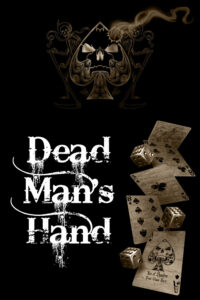 Dead Man’s Hand is a Wild West themed RPG in pocketmod format (go to www.pocketmod.com for more information about pocketmod), permitting you to play pretty much any kind of character you can make up (and your game master a.k.a. Sheriff approves).

The mechanics are card driven and revolve (get it? it’s wild west, so they revolve .. duuhh..) around building pokerhands and paying with jetons for better hands.

This site uses Akismet to reduce spam. Learn how your comment data is processed.